I have been exploring the art of needle felting lately. Here is my most recent project- a little bluebird for my daughter :) 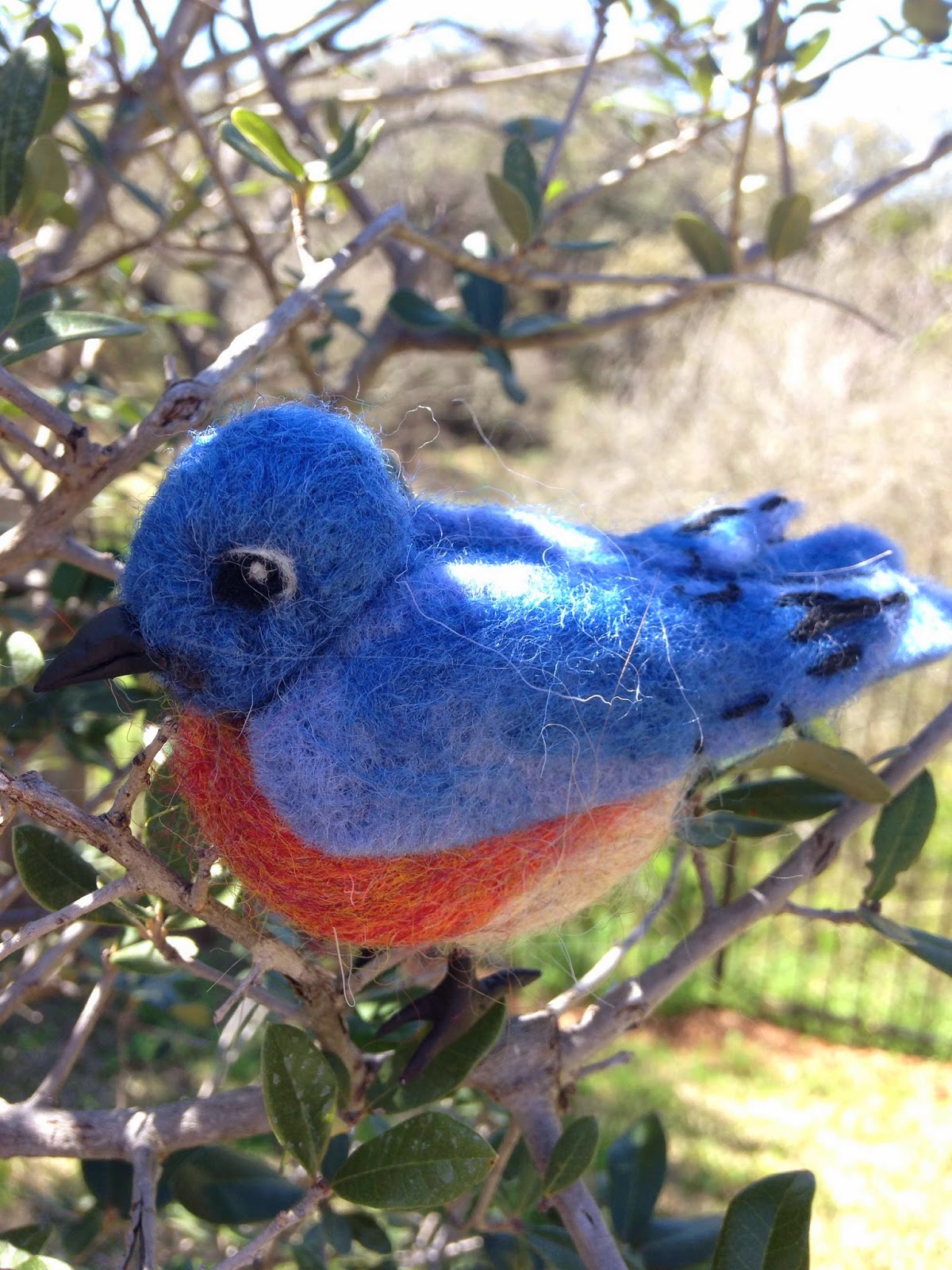 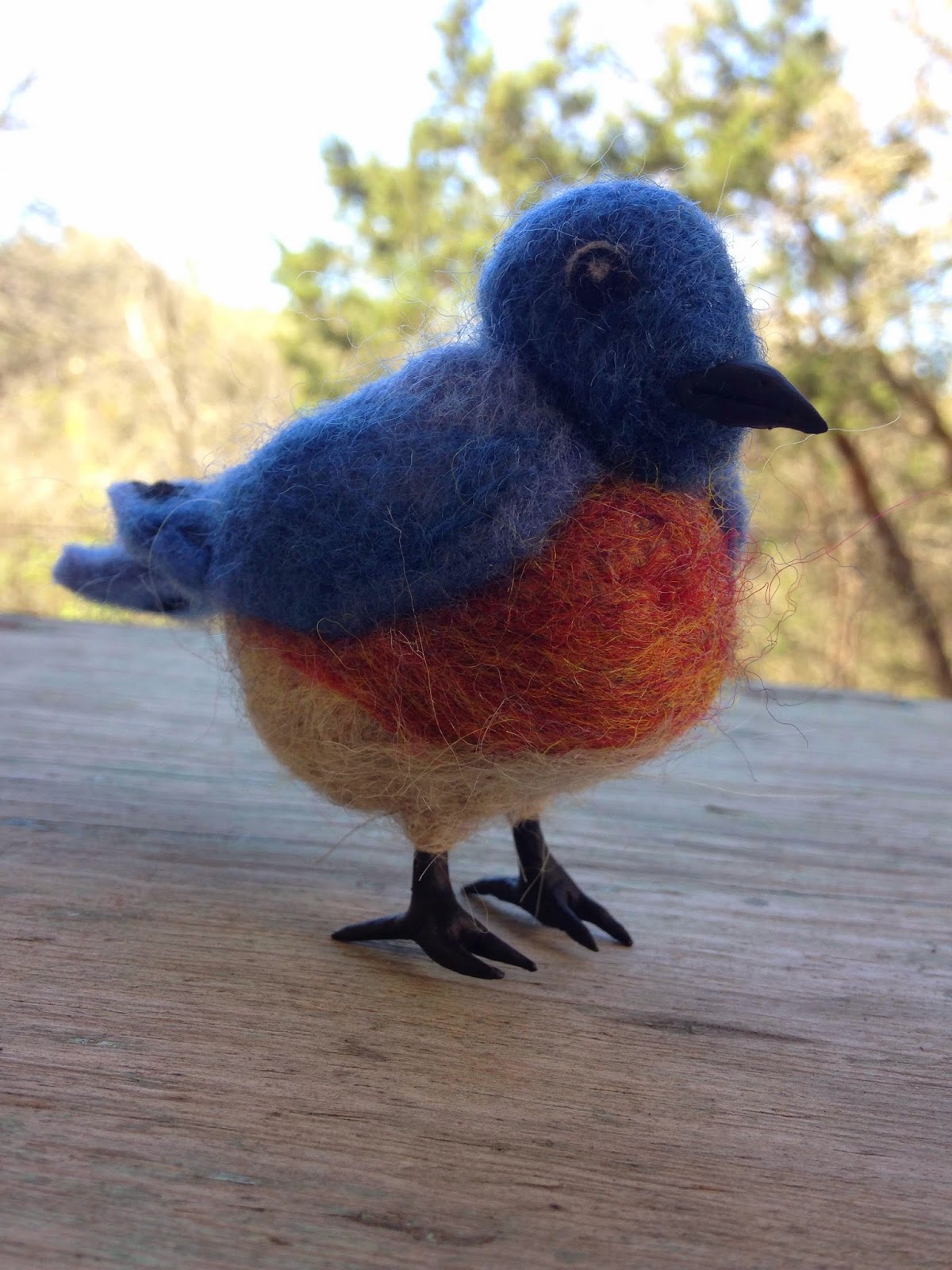 This little guy is made of dyed wool with a clay beak and feet.
Posted by Unknown at 1:07 PM No comments:

I have been exploring the issue of empathy (or lack thereof) in depth lately. It appears to me that empathy is inherent in the very young (my one year old brings me a stuffed animal when I lay down or offers me a drink or snack when she is having one), but at some point empathy is either reinforced by good parenting and the educational system or literally taught out of the child. The result is a population of adults (many in power) that lack compassion and the ability to walk in another's shoes. We judge before we listen, we condemn before we seek to understand, and we deny without regards to how we would feel if we were the ones in need. It is far too easy to throw stones from the top of the hill.
Below is a link to a great piece entitled "Where is the Love?" by NY Times Columnist Nicholas Kristof. I strongly encourage reading it :)
Where is the Love? by Nicholas Kristof 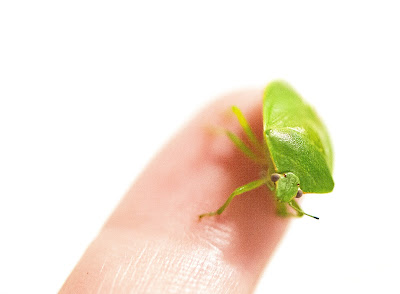 Insects are so cool! Their bright colors, patterns, and bold eyes make them fascinating to examine. Why not encourage your kids to look more closely at these critters? Have them get down on the ground and try to imagine life as an insect. They can write stories or draw pictures from this perspective. 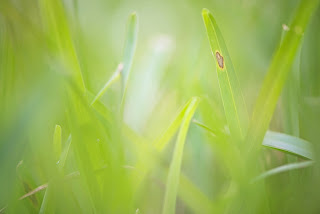 Have the kids use magnifying glasses to examine the insects they find carefully. Create enlarged, abstract pictures of a single section of an insect (for example, its eyes or a portion of its pattern) . They can paint, draw, or color these. They can use wax crayons to separate the parts and then paint it in with watercolors. If you have ever done this, you know that the watercolor paint won't stick to the crayon and a neat effect is created. The possibilities are endless! 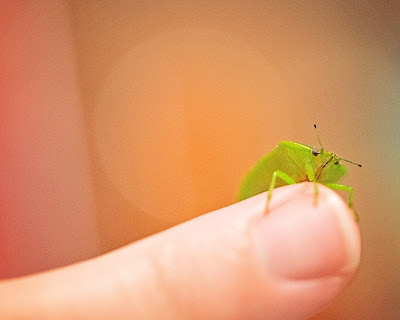 Maintaining a Sense of Wonder 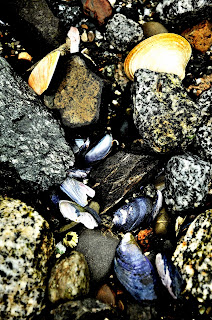 Today I watched as a delicate, white feather- probably a down feather- drifted in the breeze and then caught ahold of a leaf from a tree. The feather clung to the leaf with all its might for quite some time, until it eventually continued its graceful descent. I was mesmerized by this feather for some reason; much in the same way that my young daughter will examine a found object carefully for long periods of time. She, like me, has a sense of wonder about her. For her, it is natural and simply a part of being a child- but for me it has been nurtured over time. Growing up, my siblings and I were encouraged to play outside as much as the weather and general safety allowed- Rain, snow, and night fall did not stop us- We blazed trails through the narrow greenbelts that separated the houses in my grandmother’s neighborhood and splashed in muddy puddles after summer showers. We collected bones on gravel roads, petrified wood in dried up creek beds, and rocks on the playground. We watched tadpoles, collected from a nearby stream, grow into frogs and then released them; and we rolled down grassy hills till we made ourselves sick. My parents are not biologists, or even environmentalists. They are both business people that simply believed that it was best for us to have freedom in our play. They did not overly worry about the always present possibility of harm, but taught us to be safe and use good judgment.  That is all we really can do, isn’t it? What did all of this version of parenting result in?- Three children, all now adults, that care immensely about the natural world; people that understand that everything is connected and nothing is to be taken for granted; and most importantly, three individuals that continue to have that beautiful, natural sense of wonder about the world that is so often lost after childhood.
Rachel Carson spoke in depth about this “sense of wonder” and its importance. She stated that it is not the teaching of the natural world that is important, but the feeling of it. One must develop a healthy relationship with other living things in order to ultimately appreciate, value, and protect them. Filling a child’s head with facts and figures will only bore them and help detach them from what is wild. This is where the traditional education system fails our kids. Rather than focusing on experiential learning, we like to show slideshows, videos, and textbooks. We remove the wonder, and replace it with monotony. Fortunately, education is reforming in our country thanks to dedicated teachers, unique public charter schools, and the creation of innovative private schools.
I grew up in major cities, and still managed to do everything I mentioned at the start of this article. While I got to go to my grandparent’s farm on the weekends, I was mostly an urban dweller. Creeks, flood easements, drainage ditches, and vacant lots- these are all present in almost any city. Do yourself, our planet, and your children a favor- get outside!
Posted by Unknown at 12:20 PM No comments: 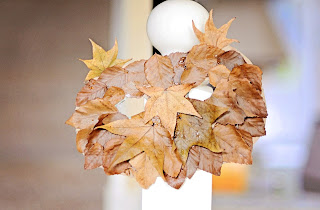 I thoroughly enjoy collecting leaves that have fallen from the trees any time of the year. There are so many different shapes, colors, and patterns to be found. On the 4th of July this year, I walked out in the backyard to find an adorable little Screech Owl perched in the tree as it rained all around us. He let me walk right up to him as he stared back at me with his large, bright eyes. It was after this wonderful encounter that I came up with my most recent idea- making an owl mask from found leaves! First, I collected my supplies: leaves picked up on walks, string, a cardboard container from last night's dinner, glue, and scissors. 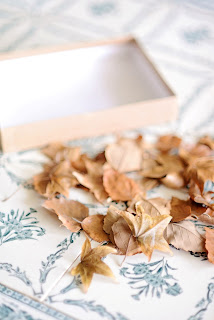 I cut a cat-like shape out of the cardboard to act as my base and then I cut holes for eyes and attached string so that the finished mask could be worn. After doing this, I began strategically gluing on my various leaves in a pattern that I felt mimicked the feathers of an owl. 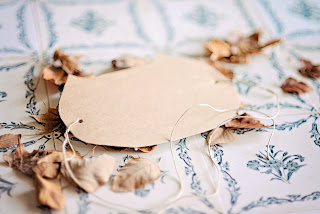 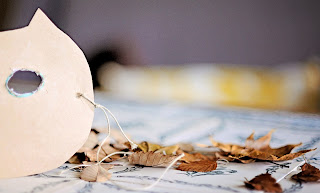 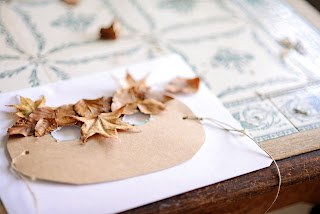 This is a great project for kids slightly older than mine. Bug would not let me put the mask on her to model it, let alone participate in the project (she is only one after all). I was quite pleased with the final product. One could also use a watered down non-toxic glue mixture to varnish the leaves, similar to decoupage.  What a great seasonal project for Autumn, or art project to integrate into a unit on animals. 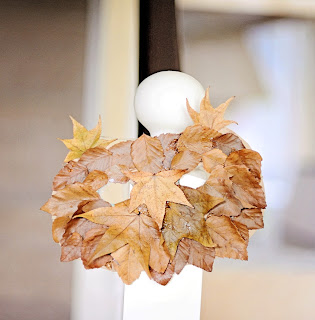 Posted by Unknown at 8:19 PM No comments:

Finger Painting with the Garden 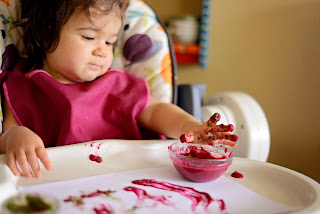 Okay, so my daughter (aka Bug) LOVES to play with her food. She will grab it off the spoon and smear it everywhere as she laughs and laughs. The problem is I want her to eat her food and not play with it. I was trying to come up with a way she could finger paint without using paint, since she still puts everything in her mouth and most paints (even clay based, natural ones) aren't too good for one to eat. I have a teeny-weeny garden (that I am working on expanding- that is a later post) and sometimes I have an excess of things, or they go bad before I pick them. Today, I decided my basil needed a haircut. If Bug were a little older, I would have her help me trim the basil and clean out vegetables, etc.

Once I gathered the basil, I pureed it in a small food processor with a little water. Once pureed, I poured the green goodness into a bowl and added flour slowly until it was thickened. I did the exact same thing with some beets that had gone bad. The beets created a pretty bright fuchsia color! 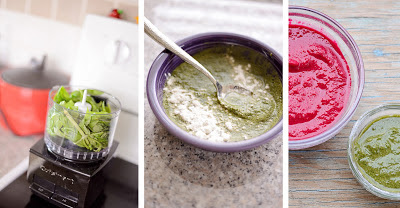 While the overgrown portion of the basil and the slightly rotted beets were not ideal for cooking anymore, they were perfectly safe alternatives to real paint for Bug's first explorations in finger painting. Had she eaten any of the paint, she would have been perfectly fine. She had an absolute blast and it was not hard at all to clean up! You could also dry the artwork in the sun and laminate it if you wanted to save it for the fridge or wall. What a great extension activity for a home, community, or school garden! 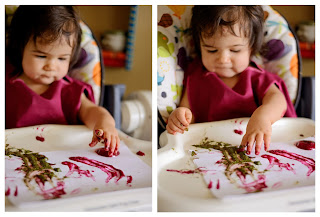 Posted by Unknown at 2:12 PM No comments:

Looking for Patterns in Nature 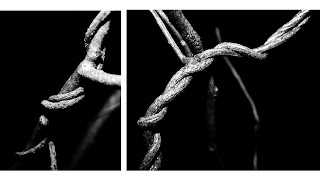 Patterns are EVERYWHERE in nature and there is a lot of beauty to be found in these patterns. What better way to teach kids about shapes and patterns than to take a walk outdoors and try to find them? You can focus on any combination of shapes and/or patterns you choose. I uploaded a few more examples from my own wanderings below. If your kids are old enough to use a camera, have them photograph what they find. You can also have them draw, paint, and journal their discoveries as well. One cool example from a blog called The Imagination Tree (theimaginationtree.com) is to have kids create their own land art inspired by Andy Goldsworthy. Check it out here: Great Andy Goldsworthy Activity from The Imagination Tree. 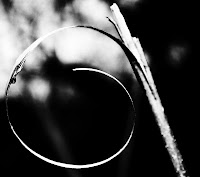 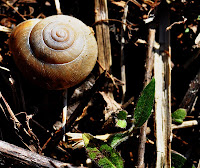 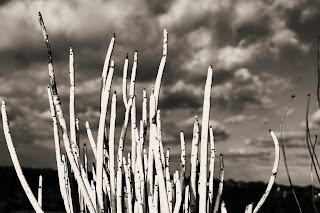 Posted by Unknown at 2:00 PM No comments: